Americans with Disabilities Act (ADA) lawsuits under Title III are often filed against businesses and landlords. They can be defended, however, if the plaintiff who filed the lawsuit lacks standing in court. This is more common than it might sound.

In law, standing is a requirement for the party seeking a legal remedy. That party must show that they have sufficient connection to the alleged violation and have, or will have, harm from it. Standing is what prevents someone from bringing a lawsuit over something that doesn’t affect them, or on behalf of someone they have no real connection to. A plaintiff must have a real stake in the outcome of the litigation.

If an ADA plaintiff does not have a bona fide intent to do business with the defendant, then there is no standing because there is no harm to the plaintiff. Someone with a disability cannot just sue a business that he/she has no actual intent to ever do business with. There would be no harm for the court to remedy, and standing would not exist. The same principle applies to accessibility claims under California’s Unruh Civil Rights Act. END_OF_DOCUMENT_TOKEN_TO_BE_REPLACED

After nearly two decades of peace in the vineyards, California wineries are once again the targets of ADA litigation. ADA lawsuits are being filed almost daily against wineries large and small by a single plaintiff, Andres Gomez. Mr. Gomez, a Miami resident, has sued more than 100 wineries in Northern California and the Central Coast, claiming their websites violate the ADA.

You may recall the late 1990s, when wineries in the Napa, Sonoma and Anderson valleys offering tasting rooms, vineyard tours and special events were the targets of ADA architectural barrier lawsuits. Those lawsuits involved physical barriers such as inaccessible parking, tasting rooms, and bathrooms.

Focus now is on cyber accessibility

Well, wineries are back in the crosshairs of serial ADA plaintiffs. These recent ADA lawsuits focus on website accessibility for people who are visually impaired. They allege these wineries discriminate against individuals who navigate websites using the assistance of screen-reader software. Screen reading software is an assistive technology that interacts with an application’s digital components – such as images, text, links and buttons – by converting these and other elements to audible synthesized speech outputs. Web developers need to code websites to be screen-reader compatible. END_OF_DOCUMENT_TOKEN_TO_BE_REPLACED

In another blow to serial ADA litigation against hotels, a judge in the Northern District of California has issued an opinion dismissing the case against JMBM client OCI, which owns and operates a Comfort Inn & Suites near the San Francisco International Airport.

Brian Whitaker, who has filed nearly 2,000 ADA lawsuits in the last two years, claimed that OCI failed to include enough detail in its online description of accessible features, violating the ADA’s “Reservation Rule.” JMBM filed a motion to dismiss on behalf of OCI, which was granted on January 6, 2022. This is the second Reservation Rule cases dismissed by this judge. The opinion is available here.

The Reservation Rule refers to ADA guidelines requiring that hotels include information about accessible rooms and features on their website, so that guests know before booking if they are able to safely and comfortably stay at the property. A hotel may be ADA compliant if it includes either a bathtub or roll-in shower, for example, but some guests may need to know which option is provided in order to determine if the room meets their needs. END_OF_DOCUMENT_TOKEN_TO_BE_REPLACED

The Central District has been inundated with ADA lawsuits by California plaintiffs. According to its Minutes of March 8, 2021 noted in James Shayler v. JPMorgan Chase Bank there were 419 ADA cases filed in the Central District in 2013, constituting 3 percent of the civil actions filed. Fast forward to 2019, when in the first six months alone, ADA lawsuits comprised 24 percent of its civil cases (1,868 matters). ADA cases filed in 2021 are on pace for even more.

Similar numbers of ADA cases are being filed in California’s Northern District which has seen a significant increase in ADA cases alleging 28 C.F.R. Section 36. 302 (e) hotel reservation lawsuits. In an effort to curb or streamline the plethora of ADA litigation, the Northern District recently revised its General Order 56. END_OF_DOCUMENT_TOKEN_TO_BE_REPLACED

There has been a sharp rise in the number of Americans with Disabilities Act (ADA) lawsuits filed in 2020 and 2021 thus far alleging a lack of compliant passenger loading zones. Many of these lawsuits have been filed against hotels in California throughout the state. The lawsuits are generally filed by serial ADA plaintiff Theresa Brooke. She is generally represented by attorney Peter Strojnik.

In a unanimous published opinion, the United States Court of Appeals for the Ninth Circuit (Ninth Circuit) affirmed the District Court’s dismissal of Whitaker v. Tesla Motors, for failure to state a claim of an action under Title III of the Americans with Disabilities Act (ADA). This case may have broad application for ADA defense lawyers because very similar “form” complaints are used widely in Southern California. According to the Ninth Circuit, these complaints are defective. There are literally hundreds, if not thousands, of virtually identical Complaints on Federal Court dockets in California and across the country.

Brian Whitaker, whose complaint states he uses a wheelchair for mobility, is a “tester” who visits businesses to ascertain whether their facilities comply with the ADA. Whitaker files lawsuits against those he determines are non-compliant, using complaints that are little more than a “fill-in-the-blanks” form.

In this case, Whitaker visited a Tesla dealership and alleged its service counters denied him full and equal access and “created difficulty and discomfort”. He further alleged that Tesla’s failure to provide accessible service counters prevented him from returning to the dealership. END_OF_DOCUMENT_TOKEN_TO_BE_REPLACED

It’s important to remember federal courts are courts of limited jurisdiction.  That limited jurisdiction derives from Article III of the U.S. Constitution. To establish standing under Article III, an ADA plaintiff must show actual or imminent injury. Injunctive Relief to remove access barriers is the only relief available to an individual ADA plaintiff in Federal Court.

In August, 2020, the plaintiff in Anthony Bouyer v. LAXMI Hospitality, LLC filed an action alleging the defendant’s hotel in Woodland Hills, California violated the Americans with Disabilities Act (ADA).  According to the Complaint, the plaintiff is substantially limited in performing regular life activities and uses a wheelchair when traveling in public.  The Complaint alleges that the plaintiff visited the hotel where he encountered ADA violations.  The hotel had no record of the plaintiff’s alleged visit.  The plaintiff’s Complaint sought injunctive relief requiring the defendant to make the hotel accessible.
END_OF_DOCUMENT_TOKEN_TO_BE_REPLACED

In 2020, we saw an explosion of federal lawsuits against hotels alleging that they failed to comply with 28 C.F.R. 36.302(e) of the Americans with Disabilities Act (ADA) by not identifying accessible features on their own and third party booking agents’ websites.

Twice this year, we reported that ADA website lawsuits filed against hotels by serial plaintiff Deborah Laufer were dismissed as she failed to show she had standing to sue. Is the third time a charm, or is it the prelude to an appeal?

On November 19, 2020, a federal district court judge dismissed yet another ADA website lawsuit because Ms. Laufer failed to show she had standing to sue under Article III of the Constitution because she did not show “individual” or “particularized” injury.

END_OF_DOCUMENT_TOKEN_TO_BE_REPLACED 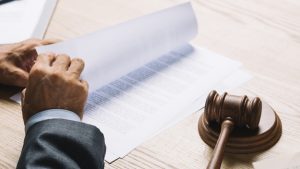 Title III of the ADA allows customers and visitors to sue businesses and landlords for disability discrimination in court. The alleged violations range from everything from parking lot slope to website design. What should you do if you’ve been sued under Title III of the ADA?

Title III ADA cases are very seldom “bet the business” size cases. They can generally be resolved through settlement negotiations or court motions without threatening continued operation of the business. But you need to take action as soon as you’re aware of the lawsuit or threatened lawsuit.

END_OF_DOCUMENT_TOKEN_TO_BE_REPLACED

The Supreme Court and the Ninth Circuit: Rights to due process

On October 7, 2019, the U.S. Supreme Court declined to hear an appeal by Domino’s Pizza LLC, sending Domino’s back to the trial court to determine if it can be held liable under the ADA for website accessibility. The high Court’s refusal to accept certiorari in this case was a disappointment to the hospitality industry and others. What happened?

In 2017, a federal district judge dismissed the website accessibility suit filed against Domino’s by a prolific ADA plaintiff (Robles v Domino’s Pizza LLC) on grounds that the failure of the DOJ to issue clear guidelines for website accessibility standards violated Domino’s constitutional right to due process. It appears that the DOJ was unaware of the lawsuit or that Domino’s filed a dispositive motion in the case, otherwise it likely would have intervened or filed an amicus (friend of the court) brief in opposition to the motion. Domino’s convinced the court that the DOJ had inconsistently applied the WCAG criteria in settlements, Consent Decrees and litigation. Domino’s convinced the court that such inconsistent application left businesses guessing which criteria to follow when developing their websites – the due process violation.

However, the Ninth Circuit Court of Appeals reversed the lower court’s decision and on January 15, 2019, determined that the ADA applies to Domino’s website, writing in its Opinion that: “Finally, the lack of specific regulations, not yet promulgated by the Department of Justice, did not eliminate Domino’s statutory duty.”

Now that the Supreme Court has declined to review the Ninth Circuit’s decision, the case returns to the District Court to be tried on its merits. Whether that will happen is yet to be seen – it’s possible the case will be settled soon after remand. END_OF_DOCUMENT_TOKEN_TO_BE_REPLACED